Technical specifications hugely impact software products, implementations and reporting entities around the world, so it is imperative to have a transparent and robust specification development process. Each specification goes through a maturity cycle as shown in Figure 1. A specification's advance to the next stage in the maturity cycle is usually not a linear progression, there are multiple checkpoints to ensure the specification meets quality requirements at every stage and this often involved several iterations within a specific stage as the diagram shows. 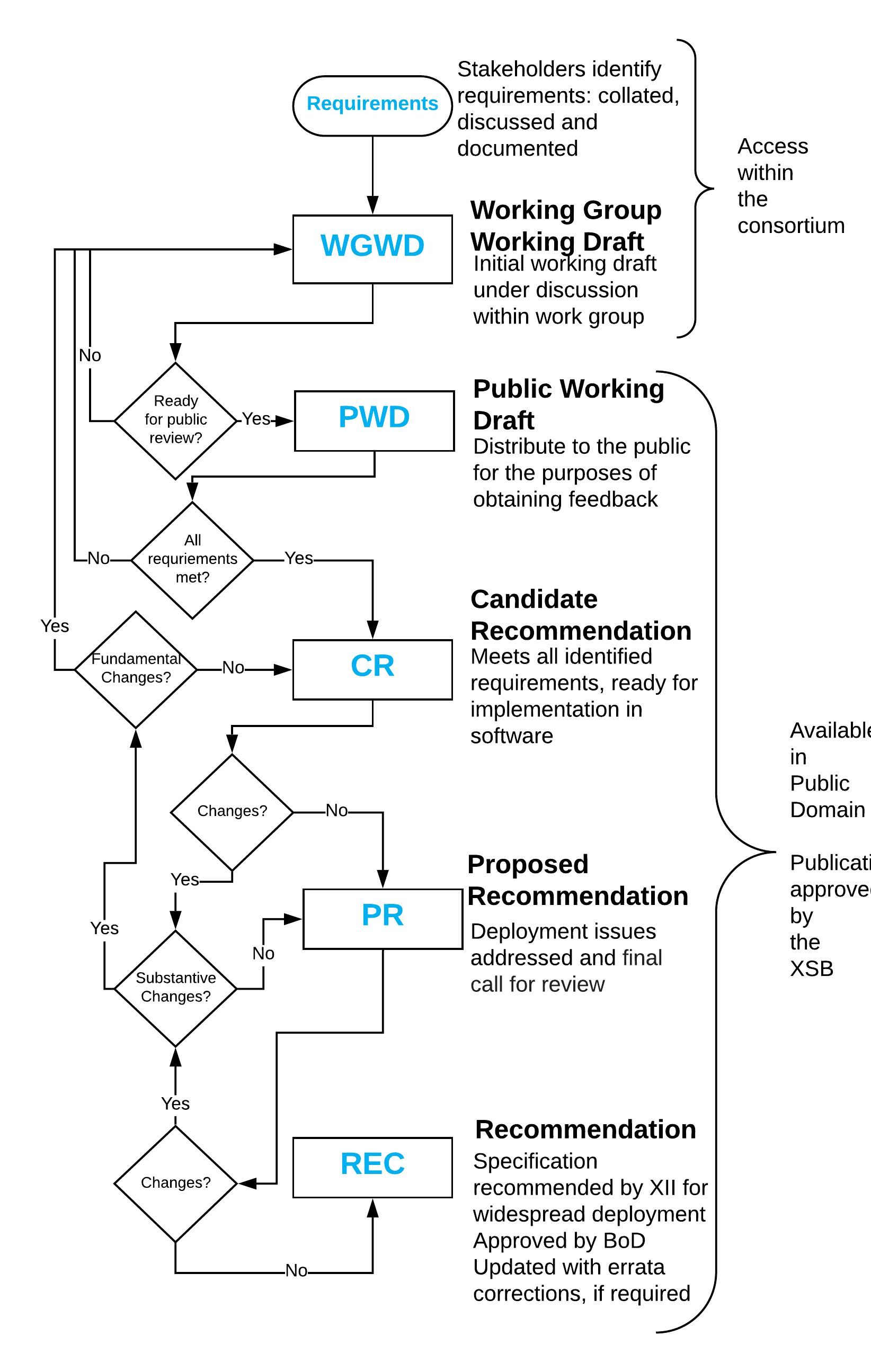 Development of technical specifications is driven by business requirements, use cases for which are often mapped to existing implementations. Working Groups are responsible for gathering, developing and documenting requirements for a proposed work product which, once documented, is sent to the XSB for approval. Once approved, work will begin.

New specifications are discussed and developed at the "Working Group Working Draft" (WGWD) and "Internal Working Draft" stages within the consortium and then released as "Public Working Drafts" (PWD) for initial public review.

After a careful review process, and usually several iterations of PWDs, they are then released as "Candidate Recommendations" (CR) and a "Call for Implementations" is issued. This is an indication that the specification now meets all requirements as defined in the requirements document, and is ready for implementation in software. The process of implementing the specification will often reveal minor issues requiring updates which are released as further Candidate Recommendations.

Once sufficient implementation and deployment experience has been gathered and it is believed that no additional development is necessary, it will then be re-issued as a "Proposed Recommendation"(PR), with an associated final Call for Review. If no further issues are identified, the specification will be re-issued without further changes as an XBRL Recommendation(REC).

Recommendations are stable, and are only updated with errata corrections for defects which were missed in the drafting. If there are any fundamental changes identified during the PR or CR stage, the specs roll back to the WGWD stage, requiring the specification to undergo another entire maturity cycle.

Each stage of specification publication is approved by the XSB and, at the Recommendation stage, additionally approved by the BoD.In addition to the technical specifications the working groups also develop supporting documents like conformance suites, overview documents and primers. These are often released concurrently with the specs.

You can browse the XBRL standards on the specification subsite. The official process of XBRL standards development is documented in "Working Groups and Work Product Development Process 1.3"

What are Conformance Suites?