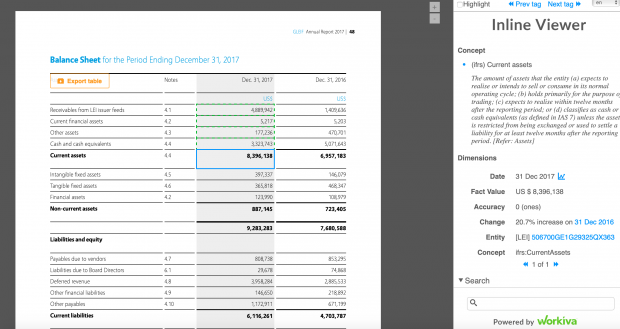 To see what Workiva’s open source Inline XBRL viewer is capable of there is an example available on the XBRL International website. This extract from the Global Legal Entity Identifier Foundation’s (GLEIF) Annual Report 2017 demonstrates how Inline XBRL documents can be both interactive and design led, almost indistinguishable from PDF reports but much more useful.

As seen above, the report is responsive (it changes size depending on the width of the screen you are viewing it on), and a host of details about the XBRL tags used to mark up the financial statement are available to view within context. When the user clicks on a tagged bit of data the relevant information can be conveniently seen within the viewer to the right. It’s also possible to export the data straight into Excel with the ‘Export table’ function which can be accessed by hovering over the orange tab in the top left corner.

If you spend a few minutes playing around you’ll see that:

This is just the start of what’s possible. Stay tuned for more examples, or go create your own! Collaborate on enhancing the viewer to make it more powerful, or more useful for your specific needs.

The example GLEIF report can be viewed here.

Our thanks go to GLEIF for collaborating on the sample and Toppan Merrill who assisted with the markup.